Today I Learned About Witch Camps in Ghana

I am, among other things, a researcher in psychology of religion. My work for the past five years has focused on two distinct religious pathways: Catholicism and Paganism. Our main project has been about pilgrimage, looking at people’s motivations for going on religious journeys and their experiences during the treks.

Mainly due to logistics, we’ve focused on European routes: Glastonbury, Stonehenge, Lourdes, and so on. I’ve spent a long time reading about and talking to pagans in the UK about their spiritual rituals and practices. Whilst witchcraft in the UK is still seen as being quite “odd”, it seems to be accepted as a quirky character trait; something that irritates many people within the pagan community, but that at least generally doesn’t lead to mass segregation from the mainstream.

This weekend, I’m doing some work for a client in West Africa, looking at social media in a couple of countries there. One of these is Ghana, and I was perusing the Twitter feed of a Ghanaian news magazine when I came across a reference to witch camps. I decided to look into this further. I am fascinated by folk religions and spiritual beliefs around the world, and know very little about witchcraft outside of Europe. Beyond reading Witchcraft and Sorcery in East Africa a few years ago, I’d never really done any research on African witchcraft at all.

In Ghana, there are a number of witch camps: small villages where people go when they have been accused of witchcraft in their home communities. Often the camps are friendly and open to strangers, with dedicated chiefs and priests to cleanse new arrivals before they are allowed into the village to live.

Journalist Leo Igwe, visiting Kukuo witch camp in Ghana, reported that many of the witches had been there for many years, with a few in their nineties who had lived in the village since they were teenagers. Some wish to return to their old homes, but are afraid to do so because they fear for their lives; others, however, enjoy living in Kukuo and do not want to leave. 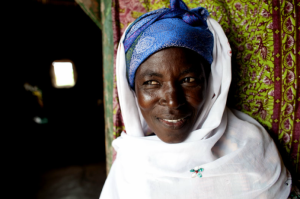 You can see more of Jane Hahn’s striking photography on her website.