Here are my favourite fiction books from this year. (Note that not all of these were published this year, that’s just when I read them.)

The following are abridged reviews; where there’s a longer version on the blog, I’ve linked to it. Blurbs are either from the back of the book, or from Amazon.

A Little Life by Hanya Yanagihara

If I had to pick just one book of the year, this would be it. And yet I didn’t write a review of it anywhere, because I felt I couldn’t do it justice.

It is, on the one hand, just a really well-written work of fiction. Weighing in at over 700 pages, it is not a light read in any sense of the word. The Times called it “Singularly profound and moving,” and I have to agree. But not everyone loved it.

The story centres around a group of friends who have known each other since university. However, fairly quickly we begin to focus in on Jude, the most troubled member of the group. His childhood was beyond traumatic – we see glimpses here and there throughout the book, culminating ultimately in a description of exactly what happened to him – and we are shown how the things he suffered as a young boy have caused him to maintain his suffering to this day. Depictions of self-harm, of relationships that cannot be maintained, of a young man struggling to carve an identity outside of the one that was carved for him, are woven graphically throughout the story.

In many ways, it’s a classic coming-of-age tale, and yet it is so vicious, so visceral in its descriptions of the horrors humans can inflict on one another, that it has drawn harsh criticism from certain corners. Mostly, the people in those corners are unable to believe that Jude’s life could possibly have been anything other than fiction: the level of suspension of disbelief required to read the book, they claim, goes too far.

And yet the things described by Yanagihara do happen, all around the world, all the time. Jude’s story, while extreme, is not even all that unusual. What is unusual is seeing it spoken about openly, seeing it depicted unapologetically in black and white: the facts of a fictional life, true, and yet also the facts of so many real ones.

A Little Life is a beautiful, haunting, melancholic, tragic book that will certainly move you, regardless of whether or not you enjoy reading it.

When All Is Said by Anne Griffin “At the bar of a grand hotel in a small Irish town sits 84-year-old Maurice Hannigan. He’s alone, as usual – though tonight is anything but. Pull up a stool and charge your glass, because Maurice is finally ready to tell his story.

Over the course of this evening, he will raise five toasts to the five people who have meant the most to him. Through these stories – of unspoken joy and regret, a secret tragedy kept hidden, a fierce love that never found its voice – the life of one man will be powerfully and poignantly laid bare.”

I posted this on Instagram just after I’d read it:

I just finished reading When All Is Said by Anne Griffin and… well.

When All Is Said has a soul, and it’s beautiful and strong and breaking and sad.

It is the story of an old man, sitting in a bar, raising five toasts to five special people in his life.

It is a quiet book, suited to being read in a cozy living room with a glass of whiskey while the rain rages outside. A book for late autumn.

It is a lovely, lovely book.

The Grapes of Wrath by John Steinbeck

“Drought and economic depression are driving thousands from Oklahoma. As their land becomes just another strip in the dust bowl, the Joads, a family of sharecroppers, decide they have no choice but to follow. They head west, towards California, where they hope to find work and a future for their family. But while the journey to this promised land will take its inevitable toll, there remains uncertainty about what awaits their arrival.”

I’d forgotten just how good this book was. I hadn’t read it since I was about fifteen, but in May this year I decided to read it again, along with Working Days: the journal Steinbeck wrote while he was working on the book.

It remains excellent, a titan of literature, and it made me want to go back and revisit some more of the classics.

The Lost Man by Jane Harper 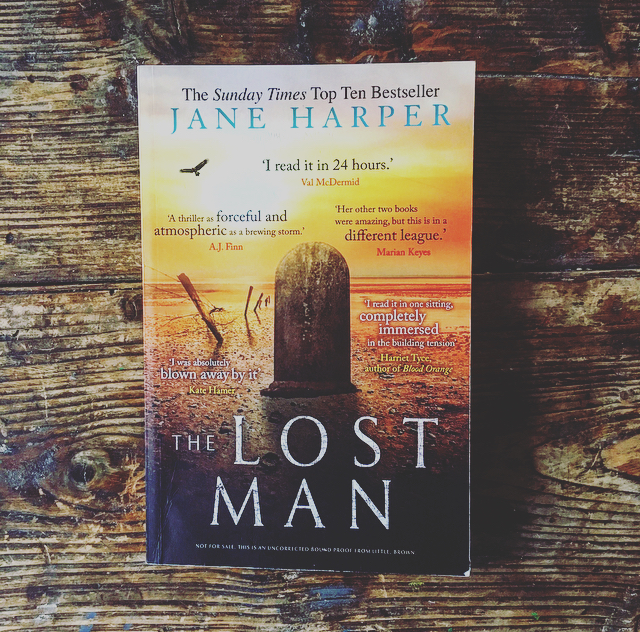 Set in the rurals of Australia, The Lost Man slaps you in the face with the stark reality of just how isolating life can be in the outback. I’ve moved around a lot, sometimes to what I’d call “rural” areas, but I’ve never lived outside the UK and, well, our “rural” just doesn’t cut it when you look at Australia. The sense of space, of being the only humans around for days, seeps into every corner of the story.

It begins with the news that a man has died. Out by an old gravestone, he seems to have become so dehydrated that his body just gave up. The marks of his feet in the sand make a sickening sundial around his corpse.

The ones who find him and have to deal with the fallout are his brothers: two of them, from a family that has its fractious relationships like any other, but out here in the middle of nowhere it’s paradoxically even less easy to find space to escape from those who might want to argue with us, or hurt us… or kill us?

Because there’s no way Cameron just got out of his truck and walked into the relentless Australian sun. Growing up on the land, he had a full awareness of how the outback would bake anything to death: animal, mineral or human. So what was he doing out at the stockman’s grave? Did the isolation finally get the better of him? As his brothers discover the truth of his relationships and business interests, they come to wonder whether they ever really knew Cameron at all.

In characteristic fashion, The Lost Man grips the reader all the way through and provides a twist so surprising that even I didn’t see it coming. And I read a *lot* of crime fiction.

The Secret History by Donna Tartt

“Under the influence of their charismatic classics professor, a group of clever, eccentric misfits at an elite New England college discover a way of thinking and living that is a world away from the humdrum existence of their contemporaries. But when they go beyond the boundaries of normal morality their lives are changed profoundly and for ever.”

I loved this book. I read The Goldfinch a while ago and enjoyed it, but it didn’t rock my world. This one was on the shelf in a cottage I was staying in, and I picked it up and read it. And it was excellent. Lord of the Flies goes to university.

The Idiot by Elif Batuman

“The year is 1995, and email is new. Selin, the daughter of Turkish immigrants, arrives for her freshman year at Harvard. She signs up for classes in subjects she has never heard of, befriends her charismatic and worldly Serbian classmate, Svetlana, and, almost by accident, begins corresponding with Ivan, an older mathematics student from Hungary. Selin may have barely spoken to Ivan, but with each email they exchange, the act of writing seems to take on new and increasingly mysterious meanings.

At the end of the school year, Ivan goes to Budapest for the summer, and Selin heads to the Hungarian countryside, to teach English in a program run by one of Ivan’s friends. On the way, she spends two weeks visiting Paris with Svetlana. Selin’s summer in Europe does not resonate with anything she has previously heard about the typical experiences of American college students, or indeed of any other kinds of people. For Selin, this is a journey further inside herself: a coming to grips with the ineffable and exhilarating confusion of first love, and with the growing consciousness that she is doomed to become a writer.”

I very much enjoyed this book. I wanted to stay longer in Selin’s world of quiet disconnected observation. It gave me a book hangover for quite a while.

The Yellow Wallpaper by Charlotte Gilman

This one was a re-read, and I enjoyed it just as much the second time around, although knowing the twist was coming did make it slightly less deliciously scary.

It was written back when doctors used to give out “rest cures” for hysteria – a form of treatment that involved a woman being sent away to lie in bed in a country house for weeks on end. While for many of us busy folks that might sound like a fun way to while away some time, imagine not being allowed to do anything for weeks: you can’t read, can’t sew, can’t cook, can’t go for a walk, can’t engage anyone in intellectual conversation. All you can do is lie on your bed and stare at the wallpaper.

It’s enough to drive anyone mad, and that was exactly Gilman’s point: The Yellow Wallpaper is a haunting depiction of the protagonist’s descent into madness brought on, ironically, by an alleged cure.

I think everyone should read it. It’s very short: you can find it online, since it’s out of copyright.

What were your favourite fiction books you read this year?

One thought on “2019 Reflections: Books – Fiction”