Fear And Trembling by Soren Kierkegaard is my favourite book. I re-read it every so often, because one can never have too much Kierkegaard.

Here are some of my favourite quotes from one of the times I read it. I’m sure there will be more to revisit at a later date. 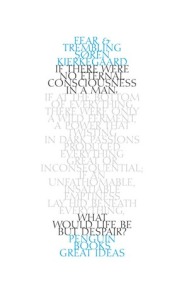 “Faith is this paradox, and the single individual is quite unable to make himself intelligible to anyone.”

“Repentance is the highest ethical expression but for that very reason the most profound ethical self-contradiction.”

“Irony and humour reflect also upon themselves and so belong in the sphere of infinite resignation, they owe their resilience to the individual’s incommensurability with reality.”

“Descartes… was modest enough to allow that his method was important only for himself and sprang partly from his own earlier bungling with knowledge.”

“It is one thing to be admired, another to be a guiding star that saves the anguished.”

“Fools and young people talk about everything being possible for a human being. But that is a great mistake. Everything is possible spiritually speaking, but in the finite world there is much that is not possible. This impossibility the knight nevertheless makes possible by his expressing it spiritually, but he expresses it spiritually by renouncing it. The desire which would convey him out into reality, but came to grief on an impossibility, now bends inwards but is not lost thereby or forgotten.”

One thought on “Fear And Trembling by Søren Kierkegaard”